Have you ever had a colleague, client or employee come to you with a really difficult personal or business problem? Can you recall listening intently and asking lots of questions to make sure you had a good handle on what was really going on before you offered 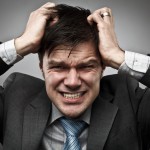 the perfect solution to the problem? How frustrating was it when the person failed to see the obvious genius of your idea? Have you ever muttered the phrase, “If this idiot doesn’t want a solution, why is he wasting my time with his stupid problem?”

If this sounds, familiar you will appreciate the situation of one of my clients, Richard. Incredibly bright, and articulate, Richard had successfully built two separate businesses into multi-million dollar enterprises. Passionate about his work, driven to success, he looked like an ideal CEO.

Did I mention that when I met Richard, the Board had just asked him to step down as CEO of his own company?

Why? On paper, Richard was a super star. He was levelheaded, logical, and possessed a machine-like clarity of purpose and drive that many Execs strive for. So what was the problem here? Why was his Board displeased enough to fire him?

Richard had the best, most logical ideas, and he was fueled with all the data anyone could ask for. Yet, he could not implement the strategies/changes he wanted to see in his team. WHY?

René Descartes, a 17th century philosopher, had a theory of the cool, objective brain being separate from the body. This idea that logic must override emotion to master decision-making has been the gold standard in cognitive analysis processes.

In Richard’s case his data-driven brain propelled him to research and prepare the best options. He would seem to be Descartes’ perfect leader, but HE COULD NOT GET ANYONE TO AGREE WITH HIM. What was wrong?

Surprisingly, executives who were the best strategic thinkers used the part of their brain most associated with emotion, the insula. The prefrontal cortex, which governs logical thinking, was still used, but not to the same degree as the insula.

This is very similar to recent research about mathematicians. Scientists did similar functional MRIs and found that the most gifted math students had significantly more right brain activity when solving math problems than their classmates.

These studies show that the creative (and emotional) mind is integral for logical decision making.

Every theory is based on assumptions. The most common assumption is that people will respond rationally. But companies are made up of people and people don’t always act rationally. If you don’t take their thoughts and needs and emotional biases into consideration, you are neglecting the value of this important variable that will make a big difference in your likelihood of success.

Further research shows that Rationality can lead to a constricted range of problem solving. An overly rational thinker gets stuck on one possible path, where the ability to creatively visualize the results of multiple possibilities gives you more leeway to pick the best one. If your focus is just on the facts, you cut yourself off from your intuitive experience, making for rigid problem solving.

Identifying and understanding the flaw in our traditions of logic and data being all-powerful is half the battle.

For Richard, we spent time working on his capacities to integrate an assessment of his own thoughts and feelings with the reaction of other stakeholders. (“Knowing how I am thinking and feeling and how others are reacting to me.”) In this way, the brain is like any other muscle, you need to exercise it. Logic has a distinct place in business decision-making, but it’s less important than most people think. The most effective leaders are the ones that are able to access both the logical and emotional parts of the brain in a fluid manner. Finding the right balance between the two is the most important part of successful leadership.

DROP US A LINE